It’s been two days since #EducatingNorthants and only now am I beginning to process what we did.  When you’re on a steam train going non-stop in a certain direction, you don’t have time to put yourself in the shoes of the passengers on station platforms.  You don’t have time to look at the journey from an outsider’s perspective, all you can do is look ahead, keep the fire stoked and focus on the destination.  You don’t even get time to look at the view.

But now, two days later, I’m taking in the view from the point of arrival, and I’m looking back at the map of the journey and feeling super, super proud.  As I trace the route back to the beginning, I begin to appreciate what we’ve done.

This is the story of #EducatingNorthants.

On 21st June 2018, Tom Rees was at a meeting of Northampton town educators discussing the current state of affairs in county education. Following months of rumours about the state of the local authority, news was emerging about financial mismanagement and the council’s plans to move to two unitary authorities.  Education and Children’s Services were not part of that conversation and educators were worried.  Despite that, like a lighthouse in a storm, Tom tweeted this: 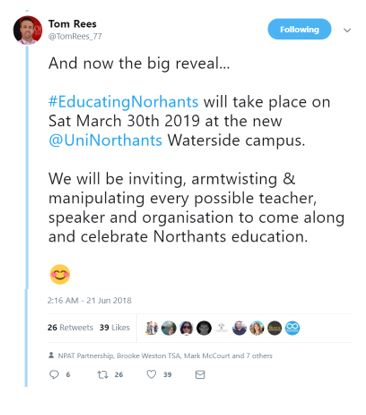 You can always rely on Tom to be a beacon of hope.  He and Helen Scott, Dean of Education and Humanities at the University of Northampton had, I think, just decided on a date and venue and put it out there to see what would happen.  I saw his tweet and, along with a few others, tweeted a reply: 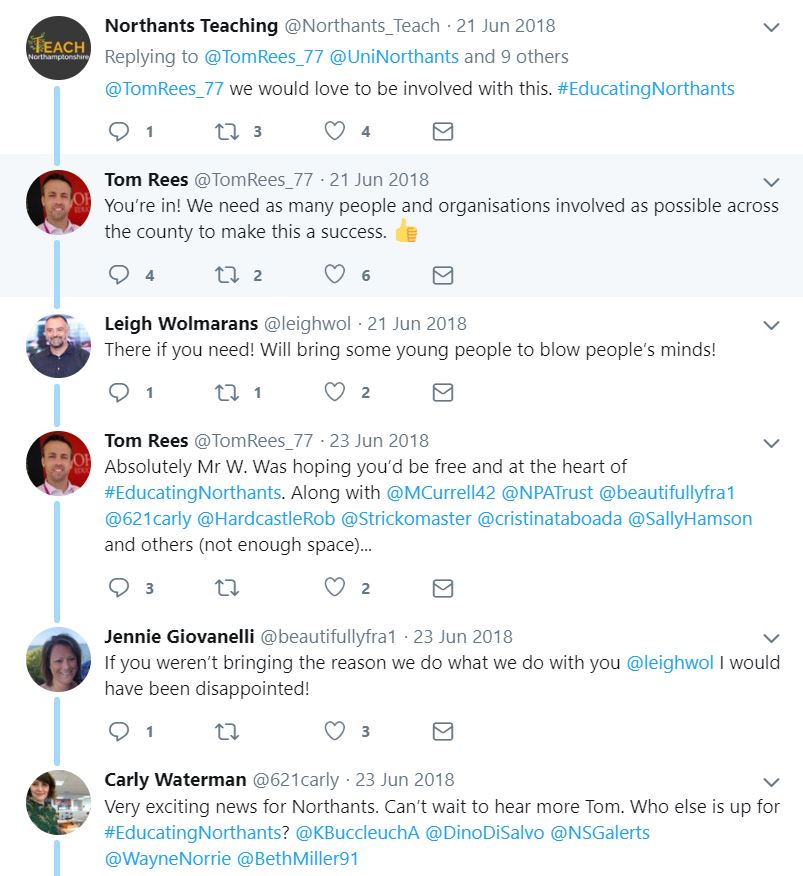 This funny little thread was the start of something big.  Jennie wanted in. So did I.  Leigh Wolmarans was keen to provide the ‘reason we do what we do’ (i.e. ‘some young people to blow people’s minds!’) and Teach Northamptonshire was keen to support us.

After that,  we held a brief meeting in July where we sat down and said, what is this thing we’re doing and why are we doing it? We made a few sketchy plans, held together with enthusiasm mainly, and then the summer break happened.

I’ll be honest, there was a point when I wondered if anything would come of it. There were four of us at that point… me, Tom, Jennie and Helen. A few others like Leigh, and Cristina Taboada-Naya from Brooke Weston had also said they’d love to be involved, but it was all so… vague.  All we knew was that we needed to flip the narrative, engage education professionals in a conversation about the future and be the change we needed to see.

What happened next was all down to a freak combination of social media, personal networks and some negative press. Whilst Northamptonshire County Council was hitting the headlines for all the wrong reasons, I was by the pool in Majorca setting up a Twitter handle and making a basic website.   Tom, Jennie and I all had access to the handle. We all started raiding our contact books and asking anyone and everyone we knew in education if they would come and speak.  And they agreed.  Why? Because it was pretty damn obvious to anyone with half an eye on the news that Northamptonshire was in a state.  We needed help.

That’s when the train started moving, slowly at first, but gradually picking up pace.  We had a line up, we were tweeting out big names and people were getting very interested.  We were getting messages from all over asking how to buy tickets, how much were they, what time would it start, would there be lunch?  We didn’t know the answer to all of those questions, but throughout Autumn we kept up the momentum of announcing speakers and generating interest.

We met again as a group, just three of us – and then again with Helen Scott.  Parallel to the organising of the conference, which was beginning to come together into some semblance of reality, something else was happening. The political situation in the county was going from bad to worse and headteachers wanted to have their voice heard. Tom, using #EducatingNorthants as the vehicle, collected over 250 signatories on an open letter to the local authority demanding that our voices be heard.  Then we held an open meeting at The University of Northampton and over 50 headteachers turned up.  We all talked about what we needed to do to ensure the local authority understood the impact that further cuts would have on the families we serve.  We decided to write a second open letter, again with hundreds of signatories, which resulted in a meeting, just before Christmas, when Tom and a few other Heads and CEOs went to see the interim CEO of the council, Theresa Grant.

It’s fair to say that we had got their attention.  #EducatingNorthants had, quite by accident, become a pressure group.  There was a void that needed to be filled.  I wrote about it here.  Heads in the county were galvanised into action, were ready to be part of a movement and wanted to make change happen. They didn’t want or need to wait for permission, they just wanted their voices heard. #EducatingNorthants became their voice.

It was an exciting time, but also fraught.  We had a bit of an identity crisis. Was #EducatingNorthants a pressure group? Were we activists? Was our agenda political? Were we adversarial? We were pitting yourself against the council, but there was something about that that didn’t feel quite right. We didn’t want a fight.  We didn’t want to blame.  We wanted to be collaborative and solution-focused.

Things shifted a bit after that.  We regrouped and talked about what #EducatingNorthants was… was it a charity? Not yet. Was it a business. No way. Was it a pressure group? Maybe. Was a grass-roots organisation with no hierarchy, no political agenda and no profit? Yes. 100% yes.  It may morph into something else in the future, but for now, grassroots was right.  We were volunteers, doing all of this on top of our full time jobs in education, we just wanted to do something positive – and something that would bring about change.

The clarity we gained in January helped a lot.  Yes there probably would be further political action, but we decided to de-couple that aim from #EducatingNorthants while we focused on the positive action of the conference.

As ticket sales closed for the conference (at some point we had figured out how much a ticket would cost and how we’d sell them) we clarified what #EducatingNorthants (in its current guise) stood for:

All a bit wordy, I agree.  We settled on #bepartofthecoversation and #everyoneswelcome.

And then the real work began. The work of putting on an event for 600 delegates, 115 presenters, 40 volunteers, 24 exhibitors and a group of incredible young performers. It was a real team effort – we expanded to a team of about 10: Me, Tom, Jennie, Cristina, Helen, Leigh, Esther Gray, Carol Wynne, Jane Clark and Julie Bedster. We had advice and guidance from the wonderful Wendy Pearmain and the support of educators from across the county – and the country.

And in the end, the train that is #EducatingNorthants pulled into Waterside Campus on Saturday 30th March with a huge hiss of steam that blew us all away (apologies for the terrible mixed metaphors).  It was vibrant, it was busy, it was positive, it was exhausting, it was everything we wanted it to be and the feedback since has been overwhelming.

Did we get everything right? No. If we could turn back time and make a few amendments, would we? Of course.  But, for a bunch of amateurs, with no experience whatsoever, doing it all for love, on top of very demanding full time jobs in education, I think we did okay.  Will we do it again next year? Who knows!

The conference was amazing, but it was just one day.  What we really need is action which leads to sustainable change.  I have a few ideas about what that action should look like, but I want to know what everyone else thinks too.  The next few months will be important for #EducatingNorthants.  The conversations happening now are the ones that will define the future direction of travel, and this time the journey will be turbo-powered.

One thought on “This is the story of #EducatingNorthants”

The Importance of Joy

From theory into practice

GUEST BLOG by Harriet Cornwell: Let the curriculum do the heavy lifting.

GUEST BLOG by Harriet Cornwell: We Are The Champions (of knowledge booklets).

GUEST BLOG by Harriet Cornwell: Your Eyes Are Bigger Than Your Belly!

GUEST BLOG by Esther Gray: Now More Than Ever

Start at Happy: A blog about my visit to Great Yarmouth Charter A

The Illusion of Choice: GCSE options

The curriculum has exploded

This is the story of #EducatingNorthants

The Stakeholder Problem: a blog about assessment

How to be strategic

We don’t need another hero

Oh Pilot! My Pilot! (or lessons in leadership)

Emotionality as strength in leadership